Understanding the Endocannabinoid system & your hormones! 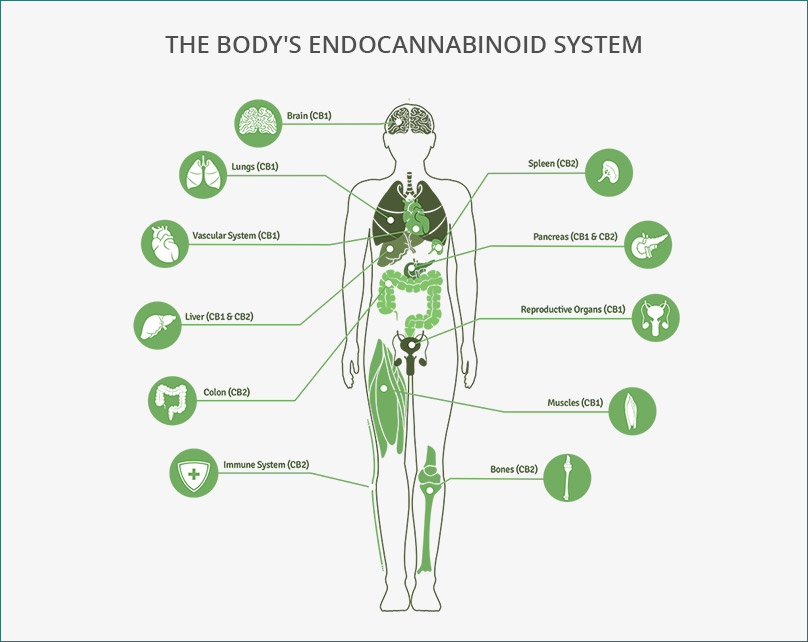 Cannabinoids are becoming more and more popular in the world of natural medicine. As research continues, we are learning more about how their effects stem from the way they interact with the endocannabinoid system (ECS).

Hormones are chemical messengers to the body that travel in our blood to organs and tissues, signaling them to work. They can affect different processes in our body including metabolism, health and mood, all of which are also affected by cannabinoids and the way they react with the ECS.

So how does it all work? How can this one product help with so many things? First we need to understand the Endocannabinoid System.

The ECS is a physiological system involved in health maintenance. The system’s receptors are found in the brain, numerous organs, connective tissues, glands and immune cells. Because it has so many points of interaction within the body, it has a powerful effect on the body as well as the mind.

When cannabinoids are introduced to the body, they react with the system’s receptors (CB1 and CB2 receptors) to produce different results throughout the body.

What is the Endocrine System?

The release of these hormones affects certain physiological functions in the body. These enable the nervous system to respond rapidly to internal or external environmental changes and maintain a response through endocrine hormonal transducers.

The ECS modulates the regulation of the neuroendocrine system working to maintain organ functions, stress response and healthy balance overall.

The ECS and Endocrine Regulation

When cannabinoids interact with the ECS, they affect the secretion of pituitary hormones. They regulate hormonal balance through the effect they have on the organs.

They stimulate the hypothalamic pituitary adrenal axis (HPA) to produce a response to stress that is dependent on the CB1 receptor signaling. Activating these receptors results in a series of signaling events that inhibits overall neuroendocrine function. The endocrine response, as part of the HPA axis, is central to its regulation.

Up until a few years ago, scientists thought the stimulatory effects cannabinoids had on the HPA axis was an exception. It was thought that the ECS played an inhibitory role on neuroendocrine functions.

Today, we understand that the functions can be both stimulatory and inhibitory, which is how it modulates regulation.

So how does CBD effect this?

Firstly, CBD inhibits fatty acid amide hydrolase (FAAH), an enzyme that breaks down cannabinoids in the body. This makes it effective for people suffering from anxiety

Secondly, it may improve the regulation of the HPA axis to modulate the sensitivity of cannabinoid receptors in the body as well as having an inhibitory role in modulating the stress induced activation of the HPA axis. This results in increased endocannabinoid signaling activity which can be helpful to anxiety disorders.

The way CBD and other cannabinoids react with the endocrine system also make it a promising treatment of infertility, obesity, diabetes and even some diseases associated with the cardiovascular system.

CBD and Hormones in the Body

CBD and Cortisol: Another way CBD is effective in treating anxiety is dependent on the way it interacts with the hormone, cortisol.

The ECS manages our response to stress via hormones like adrenaline and cortisol, which is one of the main hormones involved in managing a stress response. It produces the fight or flight instinct that is necessary for survival but increased levels of cortisol can lead to weight gain, mood swings and anxiety.

CBD is believed to interfere with cortisol secretion so decreasing its prevalence in plasma samples and making levels drop significantly.

CBD and Insulin: The endocrine system also works to manage the metabolism. It produces hormones in the pancreas, one of which is insulin. Insulin helps the body absorb and store nutrients from food and allow sugar to pass from your bloodstream to individual cells.

The relationship between CBD, insulin and the metabolism is still unclear, but studies in mice have shown that there was a drop in diabetes related to the use of CBD. Other studies have shown it can impact the functioning of the pancreas in such a way that it affects insulin production, blood sugar levels and more.

CBD and Melatonin: Melatonin is a hormone naturally produced in the body. It spikes at night to make us sleepy and levels out in the morning. The ECS plays a key role in regulating sleep via the activation of the CB1 receptors which stimulate the secretion of melatonin to regulate the sleep-wake cycle.